The newer (shinier) Bluffer’s Guide to Framing 2020 is here.

A roundup of ‘reframing’ being tested by progressive campaigns and communications in 2018, by Sho Konno

If you work in campaigns, communications, or politics, you might have heard that you need to be framing – or reframing – your issues to better persuade your audiences.

You have probably heard some variation of:

In the space of about a decade, ‘framing’ has gone from being a fringe concept to a scientifically verified buzzword. Organisations in every sector are investing significant resources and time in reframing projects, so it’s sometimes difficult to keep up with what they have all found and what they are actually recommending campaigners do differently as a result.

I don’t pretend to be one of the big throbbing brains who are leading this current wave of framing experiments. But I have found that the busy, low-budget, battle-hardened activists who I work with have benefitted from knowing enough about them to try and put them into action (and see if they work). This “bluffer’s guide” is for you.

You could say that using different angles to persuade an audience is as old as communication itself, or point to the academic discipline of cognitive linguistics in the 1970s as the first time this practice gained substance and rigour. But it is definitely in the past decade or so that it has taken off in acceptance and implementation by campaigners and communicators. So rather than trying to give it a dictionary definition, it is worth knowing (or being able to blag) some of the ‘founding texts’:

Don’t Think of an Elephant! Know your values and frame the debate – the essential guide for progressives
(George Lakoff, 2004)

Published on the eve of George W. Bush’s re-election, at a time when progressives were in despair, cognitive linguist George Lakoff’s book catapulted framing from academia and politics into the mainstream.

Bluffer’s Guide
“We shouldn’t accept ‘pro-life’, ‘tax relief’, or ‘family values’ as the terms of the debate, that is just battling conservatives on their home turf.”

Weathercocks and Signposts: the environment movement at a crossroads
(Tom Crompton, 2008)

WWF published this report in the run up to the pivotal Copenhagen UN Climate Summit (where climate activists feared, and eventually condemned, a failure). Criticism of ‘behavior change over system change’ within the environmental movement was not new, but what was new was large international non-profits putting serious time and effort into investigating the role of ‘values’ and the framing of the scale of the challenge, and in doing so questioning their sector’s method of campaigning up to that point.

Common Cause: The case for working with our cultural values
(Tom Crompton et al, 2010)

This 100 page report was part of a wider project to shift not just one sector but the whole method of campaigning, with the joint forces of poverty, environmental and climate change NGOs (WWF, Friends of the Earth, Oxfam, COIN and the CPRE). It codified and strengthened the recommendation that campaigners should swap short-term appeals to ‘bad’ values for actually changing the values of their audiences. Vitally, it also gave us a nicely designed diagram, handbook and did outreach work to actually train people in how to implement these insights.

Bluffer’s Guide:
“We need to appeal to our audience’s intrinsic, not extrinsic values – you can’t promise a prize-draw for a free microwave if people sign that petition”

In response to the measurable decline in western public support for overseas aid from the mid-2000s, the Bill & Melinda Gates Foundation started a project looking into why, and what might boost support. As you might expect, this is surely the biggest budget framing project to date – with focus groups and multi-year opinion polls across the US, UK, France & Germany, and even microgrants to encourage NGOs to experiment with implementing the findings and recommendations. When other campaigners criticised the implicit ideology behind the Narrative Project, it also became one of the first major debates within progressive framing circles.

Bluffer’s Guide:
“There are 40% of the public who we can shift if we take on cynicism, distance and futility by emphasising independence, shared values, and partnership (not just ‘progress’ on its own).”

What is happening now?

This toolkit from ILGA-Europe and the Public Interest Research Centre is focused on LGBT activism, and helpfully outlines some of the common (and contradictory) frames that the public hold about LGBT people. It also packs in multiple case studies of campaigns on issues from gay marriage to transphobia, and thankfully doesn’t shy away from critiquing them. It also goes much further to act as a guide to the thinking process (of defining, creating, then testing and refining frames) as well as specific exercises such as ‘Know your Elephant’ and ‘Framing Sushi’ which would be useful to any campaign.

Bluffer’s Guide:
“We can talk about family values without reinforcing the patriarchal ‘natural order’ of families. We can talk about relationships rather than reproduction. It’s essentially about responding to hate with love.”

Re:Frame – promoting SRHR in a time of growing populism

People who campaign for the right to contraception, abortion, and comprehensive sexuality education have been on the retreat worldwide, even while other gender/sexuality movements have had victories – could it be down to the framing they use? That was the question tackled by a EuroNGOs conference of the sector in 2017. One to watch: especially whether the SRHR movement (literally named by a jargon acronym-by-compromise) can move on to agreeing what is an acceptable single simplification of their causes.

Bluffer’s Guide:
“Should we call it ‘forced childbirth’ instead of ‘pro-life’? Should we say ‘relationships’ instead of ‘sexuality’?

The US-based Frameworks Institute has emerged as a dedicated ‘frame tank’ of social scientists, pumping out briefings suggesting reframing for almost every issue in politics, on both sides of the Atlantic. Some interesting briefings just from the past year include:

Gaining Momentum: A toolkit for reframing aging and ageism

Bluffer’s Guide:
“Don’t talk about older people as ‘seniors’ who are ‘battling’ aging which the rest of us need ‘to do something about’. As we all lead longer, healthier lives we are all gaining new abilities and knowledge we can share to ensure we all thrive as we age.”

Bluffer’s Guide:
“By emphasising the children of undocumented migrants who came to the US ‘through no fault of their own’, American liberals are currently falling into ‘the worthiness trap’”

Talking about Poverty: How experts and the public understand poverty in the UK
(with JRF & NCB)

Bluffer’s Guide:
“Avoid talking about ‘needs’ – the public equates this with basic subsistence which can undermine support for a robust welfare state. Talk about ‘self-determination’ instead.”

Getting Below the Surface: Mapping the gaps between expert and public understandings of the ocean and marine conservation in the UK

Bluffer’s Guide:
“What’s great about Blue Planet 2 is that it didn’t romanticise the ocean in a way that could reinforce the ‘Vast Other World’ or ‘Unchanging Sea’ frames. It showed how the ocean as whole sustains us – not just the particular parts we extract – and gave examples of specific solutions and attributed specific responsibilities.”

If you’re wondering why this is so UK and US based, that’s partially my English-language bias and partially a reflection of which organisations have the budget to be able to do this kind of work. But there are some interesting projects from the ‘Global South’, even if they don’t always call it framing.

Who is working on new framing?

Strategy Winning Narratives Online Training (test) Analysing narratives Audiences So, you know how important narratives are and you have an idea of how they fit in your strategy. Now what about the people who are Read more… 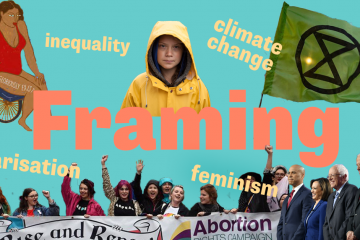 A summary of framing tips on migration, climate change, poverty etc. For busy activists who don't want to get a psychology degree.